A few weeks ago I gave an introductory course to reinforcement learning with the OpenAI Gym environment. As content, I used the writeups I already put on my site several weeks ago. I asked Jasper van der Waa (TNO), who co-organized it, to write a short summary of the summer school. 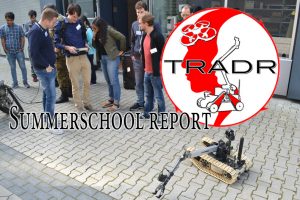 For some years now it is quite clear that robots will be part of our future. However, we still have a long way to go before we have robots like those in “I, Robot” or “Ex Machina”. The research in the TRADR project is one step towards this future. More specific, one step towards a future where robots aid rescue workers right after major disasters like hurricanes and earthquakes by locating victims and identifying dangers. The TRADR SIKS Summerschool of 2017 focused on the vital issue of how we can let robots and humans work together as teammates.

TRADR; A step towards rescue robots

In the week of the summer school, several major experts addressed various issues. Such as how you design and build a robot to aid in disaster response missions with the current technology by Ivana Kruijff-Korbayová from DFKI and Robin Murphy from the Texas A&M University. One of the main issues is not that the technology is not there yet, but how to integrate all previous research that has been done on robotics in a group of robots that can be used by actual firefighters. See for example this playlist where the robots from the TRADR project are used after the earthquake in Amatrice, Italy.

Matt Johnson from IHMC talked about the design methodology called Coactive Design that gives you the tools to design a working human-machine team. The talk aimed to provide the next generation of researchers in robotics with a tool that helps them to create robots that work in harmony with their human users. A similar talk by Mark Neerincx from the Delft University of Technology gave his audience a tool to do research in iterations without scope creep. This method, the situated Cognitive Engineering method (sCE), is in some ways similar to the Agile methodology in software engineering. Mark Neerincx also discussed the practicalities and difficulties of making sensible working agreements with robots and smart software agents (like the three Rules of Robotics by Asimov).

Both David Abbink and Pieter Jonker, from the Delft University of Technology, shared their rich experiences with building robots. David Abbink started a lab that focuses on haptic feedback and control in robotics and researches interesting methods to solve the driver-readiness problem in self-driving cars. Whilst Pieter Jonker gave us a glimpse of the future robotic roller walkers for elderly.

Finally, multiple workshops during the week taught many new state of the art techniques. Ranging from constructive thinking in robotics by Nanda van der Stap and others from TNO, to how to implement your own ‘rules of robotics’ without conflicts and strange behavior. Among the workshops was also the one from Roland Meertens about Deep Reinforcement Learning. It taught the basic principles of high-end reinforcement learning to the generation that will most likely develop robots such as those from “Ex Machina” and “I, Robot”.